No.42-43 Strategies of Resistance & 'Who are the Trotskyists' 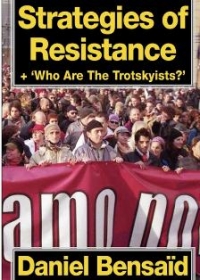 The IIRE has just published Strategies of Resistance & ‘Who Are the Trotskyists?’, a collection of works by IIRE Fellow Daniel Bensaïd including his history of Trotskyism, newly translated into English by Nathan Rao. This 182-page book has been published in cooperation with Resistance Books. The introduction by Paul Le Blanc gives a flavour of the contents:

Daniel Bensaïd’s challenging survey comes at an appropriate moment. It is a gift to activists reaching for some historical perspective that may provide hints as to where we might go from here. Embracing and sharing the revolutionary socialist political tradition associated with Leon Trotsky, Bensaïd is not simply a thoughtful radical academic or perceptive left-wing intellectual - though he is certainly both - but also one of the foremost leaders of an impressive network of activists, many of them seasoned by innumerable struggles.

Daniel Bensaïd emerged decades ago as a leader of the French section of the Fourth International, the Ligue Communiste Révolutionnaire (LCR). Coming from the ‘generation of ‘68′ - the layer of young revolutionary activists of the 1960s - he blends an impressive intellectual sophistication with a refreshing inclination for revolutionary audacity, and with activist commitments which have not faded over the decades. In the tradition of Ernest Mandel, Bensaïd has reached for the continuing relevance of revolutionary Marxism not only in the battlegrounds of academe (as a professor of philosophy and author of such works as Marx for Our Times), but even more in the battlegrounds of social and political struggles against the oppressive and lethal realities of capitalist ‘globalization.’

In this particular work - succinct, crackling with insights and fruitful provocations - Bensaïd surveys the history of his own political tradition. We are not presented with a catechism, but with a set of informative and critical-minded reflections and notes. We don’t have to agree with all he says. I certainly question his taking issue with Trotsky over whether or not Lenin was essential for the triumph of the Russian Revolution (Trotsky says definitely yes, Bensaïd suggests maybe not). Nor am I satisfied when he gives more serious consideration to the dissident current in US Trotskyism of Max Shachtman and James Burnham (both of whom ended up supporting US imperialism in Vietnam) than to the tradition connected with James P. Cannon (which played a role in building a powerful movement that helped end the Vietnam war). On the other hand, Bensaïd makes no pretension of providing a rounded historical account of world Trotskyism, or even a scholarly account of the more limited issues that he does take up.

He emphasizes that ‘this essay is based on personal experience’ and is focused on what he views as ‘the major debates’ within the movement. And one is especially struck by the excellent point he makes in his Introduction regarding the necessity of understanding the varieties of Trotskyism around the world in their distinctive cultural and national specificities. Little sense can be made of Trotskyism if it is not related to the actual social movements and class struggles of various parts of the world, and to the left-wing labour sub-cultures, in which it has meaning.

The fact remains that Bensaïd offers us a thoughtful, stimulating, valuable political intervention which leaves the reader with a sense of Trotskyism’s history and ideas and diverse manifestations - and also a sense of their relevance for the struggles of today and tomorrow. For younger activists beginning to get their bearings, and for veterans of the struggle who are thinking through the questions of where we have been and where to go from here, this is an important contribution.