Upcoming books: MEMOIRS OF A COMMUNIST AGAINST THE CURRENT & CRITIQUE OF MODERN BARBARISM 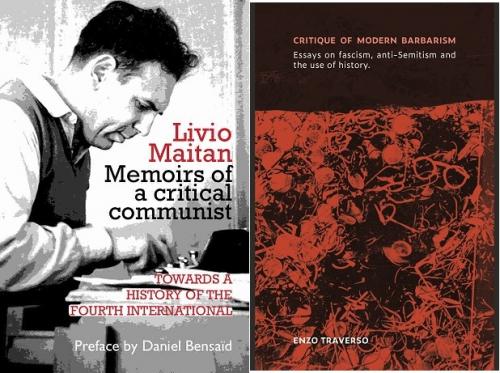 In the coming weeks, we will publish two new books; a political memoir of a central leader of the Fourth International, Livio Maitan, and a new, considerably enlarged edition of ''Marxism after Auschwitz'' by Enzo Traverso.

MEMOIRS OF A COMMUNIST AGAINST THE CURRENT
Towards a history of the Fourth International
by Livio Maitan,
Preface by Daniel Bensaid.
Translated by Gregor Benton

Translating this new book was a bittersweet experience. Through it, I was able to relive chapter by chapter my wild political youth and my middle age. Livio Maitan’s spirit lifts this story from a catalogue of false starts into a chronicle of heroism and optimism. He died before Black Lives Matter, Me Too, Corbynism, Gilets Jaunes, Extinction Rebellion and other new struggles, but he paved the way for them.

CRITIQUE OF MODERN BARBARISM
Essays on fascism, anti-Semitism and the use of history
by Enzo Traverso

In this collection of essays, Enzo Traverso examines the relationships between anti-Semitism, modernity and the Holocaust. The different parts of the book analyse multiple dimensions of the destruction of the European Jews, debates over historical memory and left-wing debates on the nature of anti-Semitism.

Inspired by the critical theory of the Frankfurt School and the heterodox Marxism of a thinker like Walter Benjamin, Traverso argues that after Auschwitz, critical thought needs to reconsider the notion of progress as such.

Enzo Traverso is the Susan and Barton Winokur Professor in the Humanities at Cornell University. His publications include: The New Faces of Fascism, Populism and the Far Right, Verso, 2019; Left-Wing Melancholia: Marxism, History, and Memory, Columbia University Press, 2017, The End of Jewish Modernity, Pluto Press, 2016; Fire and Blood: The European Civil War, 1914–1945, Verso, 2016; The Origins of Nazi Violence, New Press, 2003.