No.39-40 Socialists and the Capitalist Recession 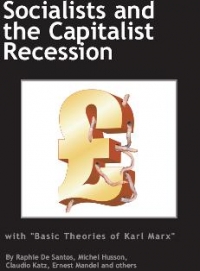 The credit crunch of 2008 produced an international recession in 2009. In this new book Claudio Katz and Michel Husson, both fellows of the International Institute for Research and Education, and SSP activist Raphie de Santos lead an attempt not to only to describe the present crisis, but also to understand its causes and debate socialist solutions.

This 216-page book brings together much of the most powerful socialist analysis of the recession.

Sean Thompson shows how neoliberal globalisation has an inbuilt tendency towards deflation. As explained in the article by François Sabado, the period since the turn of the century has been a disaster for American capitalism; first the catastrophe in Iraq and of the Bush government in general, and now an economic collapse that has completely undermined neoliberalism's 'Washington Consensus'.

The ideologues of capitalism are on the defensive. But the Marxist explanation of the crisis has to be hammered home. Who caused this crisis? Why did it occur? What is it in capitalism that leads to the globalisation of poverty while a tiny elite become mega-wealthy? And what are possible alternatives? This book is a signal contribution to making those arguments.

To give the socialist analysis in this book strong foundations, the book also includes ‘The Basic Ideas of Karl Marx’, an outline by Ernest Mandel of the core ideas of scientific socialism.