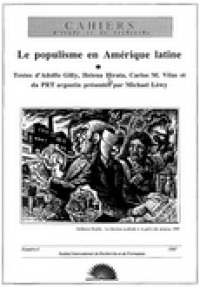 In most Latin American countries, workers have not formed independent political parties and trade unions. During much of the twentieth century large sections of the worker and peasant masses remained attached to populist parties, which at one point governed half the countries of the continent. But populist regimes' vulnerability to military coups, their inability to stop the drain of the foreign debt and the collapse of the 'economic miracles' they had presided over shook their power in one country after another. Many populist parties have subsequently sought closer links with the Socialist International. What kind of future is open to these parties in or after the triumph of democracy and neoliberalism in Latin America? The essays in Le populisme en Amérique latine analyze what made populism attractive and made its rule possible in three main countries of Latin America, and provide a basis for considering its future.

Adolfo Gilly is author of The Mexican Revolution, widely acclaimed as a major Marxist historical work. Helena Hirata is a Marxist sociologist and member of the Brazilian Workers Party. Michael Löwy is director of research in sociology at France's National Centre for Scientific Research (CNRS) and an IIRE Fellow. Carlos M. Vilas is an independent Argentinian Marxist and former economic adviser to the Nicaraguan Sandinista government. The Argentinian PRT (Revolutionary Workers Party) pamphlet was written in 1972-73, at a time when the party was led by people like Roberto Santucho and Daniel Pereyra and embodied their generation's identification with the Cuban revolution.