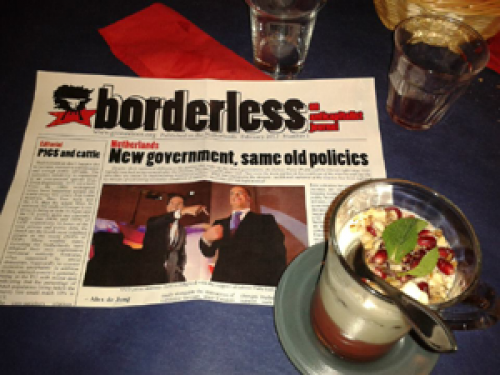 With 33 people from 15 different countries, 3 courses of food reflecting a smorgasbord of cultural influences and a live session from an azeri tar and accompanying singing chef, the fundraising dinner organised by Borderless that took place at IIRE on 9th February was precisely that, sans frontières.

Aimed at the politicized (and not so politicized) expat community of Amsterdam, Borderless is a tri-monthly anti-capitalist journal put together by those members of the Dutch section of the Fourth International (FI), the SAP, who “spreek niet zo goed Nederlands” (along with those who do!). The content of the journal varies from coverage of the political situation in The Netherlands to the student movements of Canada, with a focus on uncovering the genuine power relations (based on the tendencies of capital, of course) driving such moments in global history.

On the night, amongst the clattering of cooking pots, dinner announcements and the polyphonic sounds of turkish and iranian folk music, there emerged an increasingly positive and relaxed atmosphere, which, besides being a good place to make new friends and talk politics, led to a generous audience and over 300 € being raised. The mixture of different cultures represented by those attending, the food and the music made for a truly successful and Borderless dinner.

If you would like to know more about Borderless, contribute to its publication or join in the conversation via one of our reading groups than just head to the Facebook page: https://www.facebook.com/borderless.nl !