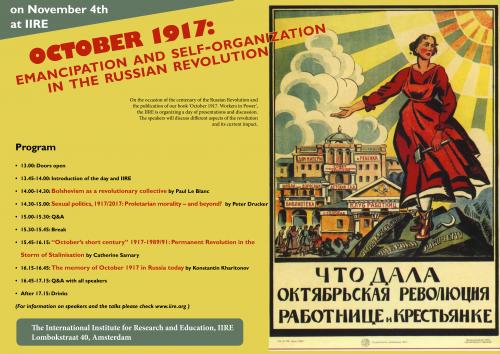 14 – 14.30 Lecture by Paul Le Blanc
Bolshevism as a revolutionary collective
A key element in determining the Russian Revolution of 1917was the so-called “vanguard party” represented by the Bolsheviks led by Lenin. Equating 'Bolshevism' with Lenin, however, obscures more than it illuminates. More useful is an examination that reveals a convergence of complexities within the realms of party structures, personalities, and political outlooks. This highlights tensions between the organizational structures and cohesion of Bolshevism and the actual mass struggles and movements culminating in revolution.

Paul Le Blanc is Professor of History at La Roche College in Pittsburgh, Pennsylvania (USA) and the author of numerous books on the Russian revolution and the socialist movement, including 'Lenin and the Revolutionary Party' (1990), 'Left Americana. The Radical Heart of US history' (2017) and 'October Song. Bolshevik triumph, communist tragedy 1917 – 1924 (forthcoming).

14.30-15.00 Lecture Peter Drucker
Sexual politics, 1917/2017: proletarian morality – and beyond?
The first decade of the October Revolution yielded a wealth of thinking and activism on sexual politics, notably Kollontai's insights into what we today call polyamory and gendered desire. Yet Bolshevik sexual politics suffered from a failure to support self-organization of the sexually oppressed, a more-than-semantic rejection of feminism, and uncritical reliance on science. Today, despite a recent renewal interest in Marxism in queer studies, the weakness of working-class organizations fuels ambivalence about Marxism's political and theoretical implications. A century after 1917, we need to ask: can a working-class-identified sexual politics still stake a plausible claim to hegemony in movements for sexual liberation, or hope to carve out an autonomous working-class sex-radical milieu on a mass scale?

15.45-16.15 Lecture by Catherine Samary
"October's short century" 1917-1989/91: Permanent Revolution in the Storm of Stalinisation
The stalinisation of the Soviet-Union was a counter-revolution within the revolution, and had disastrous consequences both for the SU and for the world revolution. But it neither ended October's revolutionary impact in the world, nor the process of Permanent Revolution – in spite of the attempt to submit the communist movement to "socialism in one country" and the "soviet model". Only international changes and the dissolving of the Soviet-Union put and end to the "short century of October." This end could only be imposed through far-reaching capitalist and imperialist counter-revolutions: direct repression, killings, coups, the 'neo-liberal' socio-economic and geo-strategic turn in response to the crisis of the world order in the 1970's; and the integration of large parts of the 'Communist' apparatus in the new historical phase that opened at the end of the 80's. But that is not the 'end of History'...

Catherine Samary is an economist and taught at the Dauphine University, Paris. She is the author of Yugoslavia Dismembered (1995) and numerous publications on Eastern-Europe and socialist eonomics. She is a fellow of the IIRE.

16.15-16.45 Lecture by Konstantin Kharitonov
The memory of October 1917 in Russia today.
On the 19th of December 2016 Russian president Vladimir Putin signed the bill on celebration of the anniversary of The Great Russian revolution (1917-1922) on the state level. '1917' remains an important date for Russian history and the centenary is marked by a wide range of publications and discussions on this question. In addition to the the state-organized activities and discourse, there exists grass-roots discussions on the meaning of October 1917. This talk will discuss the official celebration process, the state ideology of the Russian state and its view of 1917, and the currents discussion in Russian literature and media.

Konstantin Kharitonov is a historian, specialized in the socialist movement in Russia, and connected with the Center for Social-Political History in Moscow.