Review: Hugo Blanco’s “We the Indians” – essential reading for ecosocialists 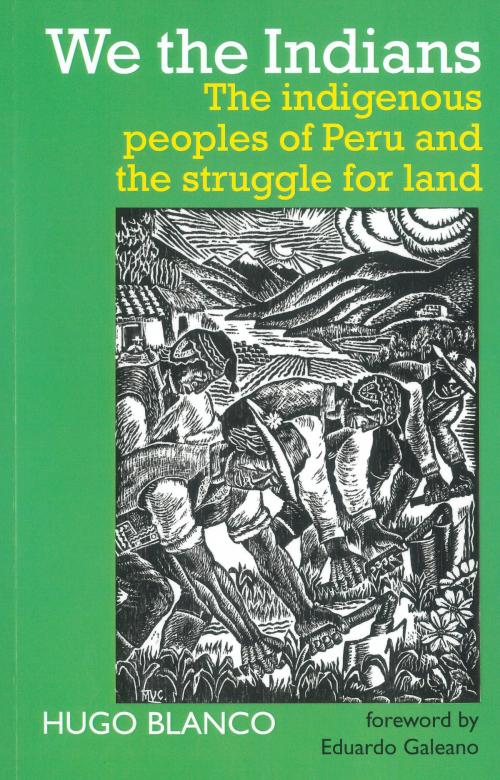 We the Indians: The indigenous peoples of Peru and the struggles for land, Hugo Blanco, Merlin Press/Resistance Books reviewed by Derek Wall

Hugo Blanco led a peasant uprising in Peru for land rights in the early 1960s. A former leader of the Fourth International and a prominent ecosocialist, at the age of 83 he is still highly politically active. We the Indians is the first English edition of a book previously published in Spanish, a collection of essays and recollections, it places Hugo’s thought and action at the centre of debates about socialism, ecosocialism and decolonisation. Ably edited by Terry Conway, it is an essential read for all of us on the ecosocialist left.

It contains eleven chapters written by Hugo, ranging from an account of his early years of militancy to a conclusion looking at indigenous and workers’ struggles going into the future. Iain Bruce provides an introductory section contextualising Hugo’s experience for English speaking readers. A foreword from the Eduardo Galeano, author of The Open Veins of Latin America, provides a poetic account of Hugo Blanco, who for many in Peru still has an almost magical mythical status as an indigenous leader. A number of attractive wood cut graphics, end notes, commentaries and a glossary of Quechua and Spanish terms complete this impressive publication.

Hugo Blanco has led a dramatic life and the essays contain many vivid stories; this is an engrossing read. Hugo writes with fluency and flair and Lesley Ray’s translation loses nothing of the vibrancy of his prose.

Born in the Andes, Hugo speaks Quechua, the language of the indigenous people who trace their ancestry back to the Inca Empire. During his early years, he observed how peasants remained locked into a neo feudal system, where racism led to grotesque degradation. The physical branding of one indigenous peasant seems to have affected him dramatically. From his school years, where he was involved in a school strike against an authoritarian principal imposed by the authorities, to demonstrations against the corrupt Peruvian President’s decision to release the former dictatorial human rights abuser Fujimori, Hugo has led a life of unbroken militancy.

Demonstrating against the 1954 coup in Guatemala, Hugo encountered a Marxist group and became a supporter of Trotsky’s Fourth International. He helped organise a trade union for peasants in the Andes; after land owners threatened its members, an armed self-defence force was organised. The struggle for land in the late 1950s and early 1960s is described here by Hugo in vivid detail.

He was eventually imprisoned and, while the struggle for land rights was successful, he spent most of the 1960s in prison. A huge international campaign involving such figures as Sartre mobilised to save Hugo from the threat of execution. Released, he was exiled to Chile. During the coup of 1973 he sheltered in the Swedish Embassy.

The book recounts numerous occasions where Hugo narrowly escaped death. He wryly notes that he has more lives than the Peruvian cat with seven or the Swedish feline with nine, observing that he has not included the many occasions when he went on hunger strikes. Later he returned to Peru, ran for President on a left ticket, was elected as a Senator and once more went into exile after he learned that both the state security services and the Maoist Shining Path were planning to assassinate him

From the campaign in Bagua in the Amazon to defend the rainforest, to his encounters with the Zapatistas, and even his visit to Britain in 2010 when he toured the country and met Jeremy Corbyn, anecdotes about Hugo’s life on the left could be recounted in many episodes. However, while Hugo Blanco’s life is fascinating, this book is most instructive in outlining several strategic debates relevant to the left now in 2018. Hugo is less interested in retelling stories than in making observations that might aid the revolutionary transformation of our society now.

The issue of empire, imperialism and indigeneity is one issue that is well explored here. Marxism has been seen as a Eurocentric discourse, Hugo Blanco has drawn upon the legacy of Lenin and Trotsky but was also influenced by the ideas of the great Peruvian Marxist Mariátegui.

Peru, according to Hugo Blanco in 2018, has still not thrown off the legacy of European colonialism. Indigenous people are still discriminated against and European cultural traditions are presented as superior. The very title ‘We the Indians’ is a reference to the fact that ‘indian’ is used as a racist term.

Hugo shows vividly that European culture is not the only valid culture, noting that from the communal democracy of the ayllu to traditions of ecological agriculture there is much from a Peruvian culture that is vital to the creation of a better future. Part of his early success in working to promote the cause of land reform and peasant liberation came from the fact that, unlike other militants who attempted to work with the campesinos, he spoke their language, Quechua.

Hugo Blanco’s implicit understanding is that imperialism and capitalism are over-determined forms of oppression, linking political institutions, economic forms and cultural aspects. This can be forgotten by revolutionaries, he notes that the ultimate failure of the Maoist Shining Path, came because their sectarianism, did not allow them to respect and work with existing peasant institutions such as the rondas, (self-defence committees). Language is an important aspect of socialist struggle, one thinks of the current battles to defend the Irish language or Turkish attempts to repress the use of Kurdish.

While Hugo Blanco is known for militant action including armed defence, strikes and nonviolent direct action, he has waged a cultural battle too, as part of the process of liberation. The book includes an account of his correspondence with the Peruvian novelist José María Arguedas, who wrote in Quechua, and criticism of the most well-known Peruvian write Mario Vargas Llosa who attacked Quechan and indigenous cultures.

Hugo is also a leading advocate of ecosocialism. He notes that the ecological crisis is driven by capitalism and only the creation of a post-capitalist economic system can protect our planet. His ecological militancy has much to teach those of us in the green movement and, at a time when others on the left were largely unaware of environmental politics, he was active in this area.

While Hugo is a keen advocate of an indigenous politics, that has never obscured for him the role of the working class. In his early years he took part in trade union organisation in a meat packing factory in Argentina and his newspaper Lucha Indigena (Indigenous Struggle), while focussing on indigenous resistance in the Americas, often contains news of trade union struggles.

In his foreword, Iain Bruce notes that are some areas of comradely difference between Hugo Blanco and member sections of the Fourth International. Blanco is no longer a member of the Fourth International, and his current politics in some ways are more related to anarchism than Leninism. Thus, Blanco has little interest in building a classic Leninist party or supporting the growth of a broad left party to take electoral power. He has been critical to some extent of the elected Latin American left, preferring to place his hopes on the construction of indigenous inspired counter power. I am aware that while exiled in Mexico, he was strongly influenced by this approach by the Zapatistas.

While like Iain Bruce, I would have some criticism of Zapatista approach, I feel that Hugo Blanco’s greatest value, and the value of this text, comes through the way it provides a thoughtful approach to the question of political strategy for revolutionaries. Hugo Blanco has maintained a militancy that is continuous, non-sectarian and has built on diverse tactics. He certainly recognises that armed defence, electoral politics, and nonviolent struggles all have a place; he notes that different contexts mean that different action is necessary at different points. He sees the construction of community institutions, drawing upon indigenous traditions, can lead to revolutionary transformation, but while sceptical of prioritising purely electoral politics is aware that it can open space for more radical change.

Thus, I would argue that those of us who wish to see a feminist, ecological and communal future beyond capitalism and imperialism should read his words with care. This text is excellent place to start.

Derek Wall is a former Green Party Principal Speaker, he teaches political economy at Goldsmiths College, University of London and is currently working on a political biography of Hugo Blanco. This review was originally published by Socialist Resistance.