No.24-25 World Bank/IMF/WTO: The Free-Market Fiasco 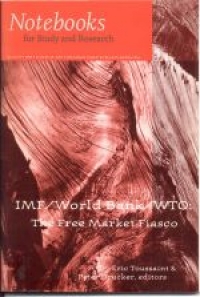 The International Monetary Fund, World Bank and World Trade Organization have managed to impose neo-liberal policies on virtually the entire world. The 16 authors of the anthology IMF/World Bank/WTO: The Free-Market Fiasco explain how the IMF and World Bank prevail on governments to sacrifice their inhabitants' health, education and nutrition in order to funnel money to Western banks. Despite rhetoric about 'ecologically sustainable development' and 'social safety nets', pressure to respect 'intellectual property rights' and devote 'everything to export' is pushing the Third World deeper into dependency. Nowhere have these policies slowed global impoverishment: neither in the disaster area that is Africa; nor in Latin America, where the 'lost decade' of the 1980s still drags on; nor in the ruins of Russia's half-dismantled economy.

IMF/World Bank/WTO: The Free-Market Fiasco raises disturbing questions about how unelected institutions are pre-empting democratic decision-making. Its aims are to inform, analyze, provoke thought and discussion, and increase awareness of international initiatives that advance democratic alternatives.