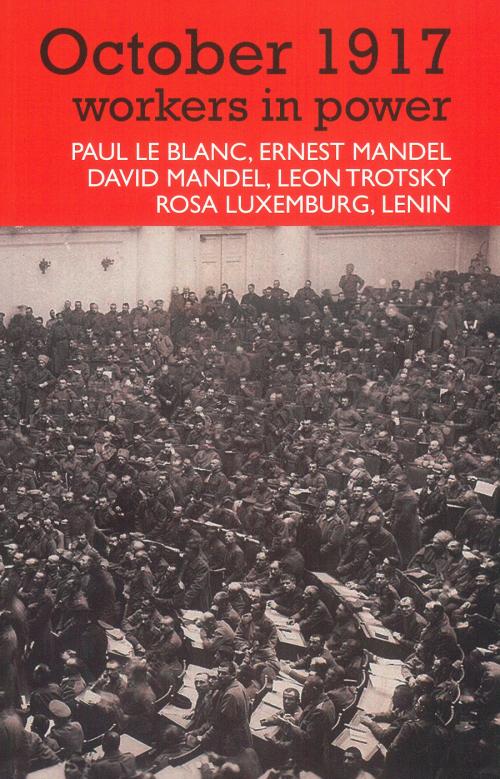 Was October 1917 a coup d'état or a social revolution? This book, a collection of classic and new essays, sets out to defend the legitimacy of the October revolution. The authors, historians and activists, evaluate the unfolding revolution and stress the mass-participation and radically democratic character of one of the great revolutions of the twentieth century.

Writing as both a historian and political activist, Ernest Mandel sets out to analyse the events and vigorously reasserts the deep legitimacy of the Russian Revolution. He considers the gains of the revolution, discusses the mistakes made by the Bolshevik leadership in 1917-21, and sets out lessons to be learnt for revolutionary Marxists today.

David Mandel's 'Workers Control and Factory Committees in the Russian Revolution 1917-18' draws on Russian-language archives to tell the story from below. Petrograd workers did not dream at first of 'socialist experiments'. Factory committees met fierce resistance from owners, they were driven to take management into their own hands and to seek the nationalisation of industries. Common conceptions about the 'utopian' and 'anarchistic' impulses supposedly behind the October Revolution are reassessed and refuted.

Paul Le Blanc's introduction evaluates the events one century on -- discussing recent scholarship and debates, new ways of comprehending class, the centrality of women and that of ethnicity, race and national identity. Le Blanc considers 'what went right' with this revolution, and 'what went wrong'. Were the Bolsheviks elitist, sectarian and authoritarian? What is still relevant today and what is not?

Ernest Mandel (1923-1995) was a Marxist economist and activist. Ernest Mandel published many articles and around 30 books during his life, which were translated into many languages. Among his most important publications are Marxist Economic Theory (1962) and Late Capitalism (1972). He was a leading member of the Fourth International and central to the founding of the International Institute for Research and Education.

David Mandel is a Canadian scholar, union and political activist. He teaches political science at the Université du Québec à Montréal and has been involved in labour education in the Ukraine for many years. He is an international expert on the post-Soviet labour movement and has written several works about the ex-USSR, including Labour after Communism (South End Press)

Paul Le Blanc is Professor of History at La Roche College (USA) and author of internationally acclaimed works on the labor and socialist movements, including Lenin and the Revolutionary Party, From Marx to Gramsci, and Leon Trotsky. An editor of the eight-volume International Encyclopedia of Revolution and Protest, he is currently helping to oversee the Verso Books edition of The Complete Works of Rosa Luxemburg.

“October 1917: Workers in Power” provides a stimulating starting-point for centennial reassessment of the Russian revolution. Paul Le Blanc provides a sparkling and authoritative survey of major historical studies; David Mandel expertly analyses workers’ control in the Russian upheaval. Classic assessments of the October upheaval by Lenin, Luxemburg, Trotsky and more recently, Ernest Mandel round out this important addition to socialist literature on 1917.
John Riddell, editor of eight-volume documentary series on the world revolutionary movement in Lenin’s time and ecosocialist activist.

For an objective study of 1917, not uncritical, but firmly rooted in the revolutionary tradition, this book can be unhesitatingly recommended.
Soma Marik, author of Revolutionary Democracy: Emancipation in Classical Marxism, Haymarket and IIRE (forthcoming, 2017).

This collection, containing both texts by participants and retrospective historical analyses, defends the achievements of the Revolution while honestly recognizing its limitations, and will stimulate informed discussion.
Ian Birchall, socialist historian.

This is an important collection celebrating the legacy of the Russian Revolution in its centenary year. Paul Le Blanc’s Introduction provides rich historical context for past events. But the book is really about the future. It is an effort to nourish the lessons of past such that they may irrigate new struggles of the future.
Tithi Bhattacharya, Professor of History, Purdue University; editorial board member, International Socialist Review.

A fascinating and unexpected collection of materials that shine a needed light on the workers revolution of 1917. All in all, a spirited defence of the October revolution at a time when many people would like to forget all about it.
Lars Lih, author of Lenin Rediscovered: What is to be Done? in Context, Haymarket 2008.