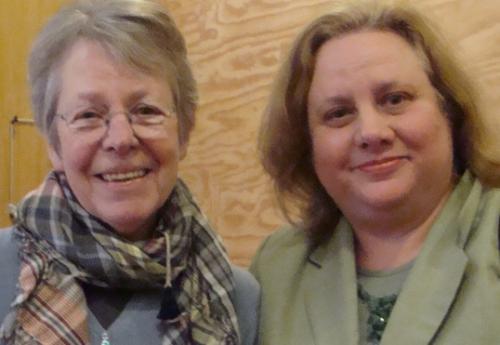 In March 2011 we were honoured by a visit from the new Cuban Ambassador to The Netherlands, Zelmys María Dominguez Cortina. The ambassador met with IIRE Executive Director Marijke Colle, former directors Susan Caldwell and Antonio Carmona Báez, IIRE Fellow James Cockcroft and a delegation from IIRE Manila.

The ambassador, pictured right with IIRE director Marijke Colle, wanted to know more about the possibilities with the Institute for developing solidarity work in The Netherlands with Cuba. She also took a tour of the Institute's library, lecture hall, seminar rooms, offices and other facilities.

As a gesture of solidarity, IIRE will be hosting the Embassy’s commemorative event on the 50th Anniversary of the Bay of Pigs. While official celebrations in Cuba and throughout Latin America are to be held on Saturday, April 16th, IIRE will host the Amsterdam celebration on Saturday April 9th.