MAY 18: COLONIAL LEGACIES TODAY: INDONESIA AND THE NETHERLANDS 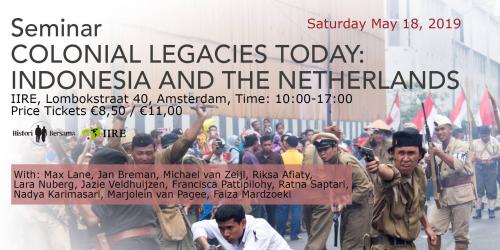 On May 18, the IIRE will host an event organized by Histori Bersama:

This seminar will bring together two themes. One is colonialism in the Netherlands Indies as a form of racism, leaving ideological and mental legacies in the Netherlands and how those legacies can be identified, critiqued and overcome. The second is a critique of colonial policies and their impact on conditions in Indonesia until today. How are labor, agrarian, human rights and women's movements working to overcome those conditions? How can international collaboration on these issues be advanced?

About the speakers:
* Dr. Max Lane is Senior Visiting Fellow at the Institute of Southeast Asian Studies - Yusof Isak Institute and Visiting Lecturer, Faculty of Social and Political Sciences, Gajah Mada University, He is author of 'Unfinished Nation: Indonesia Before and After Suharto' (Verso, 2008); 'Catastrophe in Indonesia' (Segaull 2010) and 'Indonesa Tidah Hadir di Bumi Manusia' (Djaman Bare, 2017). Lane is the translator of six books by Pramoedya Ananta Toer, including This Earth of Mankind and its three sequels. For this seminar Max Lane will talk about: 'Colonialism's Contribution to Indonesia's 21st Century Dead End.'

* Francisca Pattipilohy (93) s a living witness of both the Dutch, Japanese and Republican time. Together with Jeffry Pondaag (K.U.K.B.) she is the initiator of the open letter that was sent to the Dutch governemt in November 2017, which questioned the outline and approach of the Dutch research on violence in Indonesia (45-49). She will share her views regarding the long-term impact of colonialism on Indonesia and the Netherlands.

* Michael van Zeijl is a decolonial activist and co-founder of the Majority Perspective foundation. For this occasion Van Zeijl will present the findings of his research on the 4.5 billion payments of Indonesia to the Netherlands: 'The Dutch post war recovery financed by Indonesia: A classic Dutch tale of fraud, theft, extortion and genocide'.

* Jan Breman is an Honorary Fellow at the International Institute for Social History (IISH) in Amsterdam. He is the author of many works on Indonesian social history and also India. His work has focused on the impact of both colonial and contemporary policy on poverty and the struggles of the poor. The title of his talk is 'Colonialism as Racism', focusing on the historical background.

* Jazie Veldhuyzen is dual city council member for Amsterdam 'BIJ1', co-founder of Decolonization Network former Dutch East Indies and social entrepreneur. His talk will focus on 'Racism in the Netherlands' from a contemporary perspective.

* Lara Nuberg studied history and graduated in 2014 with a thesis on Dutch military forces in North Sumatra, 1945 - 1950. Currently she writes the blog 'Gewoon een Indisch meisje' in which she explores the meaning of the colonial past on modern Dutch society and in particular on the mixed Indo-Dutch communities living in the Netherlands. For this seminar she will focus on the Dutch government sponsored research on violence in Indonesia (45-49) and the criticism that this project received. In this context she will further elaborate on the question: 'How to deal with institutionalized colonialism.'

* Riksa Afiaty is an Indonesian curator and participant at the Jan van Eyck art institute (2018-2019) in Maastricht. She will talk about 'the current position and representation of Indonesian arts (and artists) in the Netherlands.'

- 'The 1965 Genocide and Crimes Against Humanity: Efforts for Truth at National and International Level.' By Dr. Ratna Saptari, anthropologist, assistant professor at Leiden University, researcher for the International People’s Tribunal 1965.

- 'Reviving Solidarity: Wim Wertheim and Henk Sneevliet and their responses to the Indonesian Struggle'.
By Prof. Jan Breman and Alex de Jong.

- 'Trade Unions In Indonesia Today: How to build solidarity.' By Dr. Max Lane.

- 'Understanding the Indonesia Women's Movement Today: an Introduction.' By Faiza Mardzoeki, playwright and theatre producer/director and director of The Institut Ungu