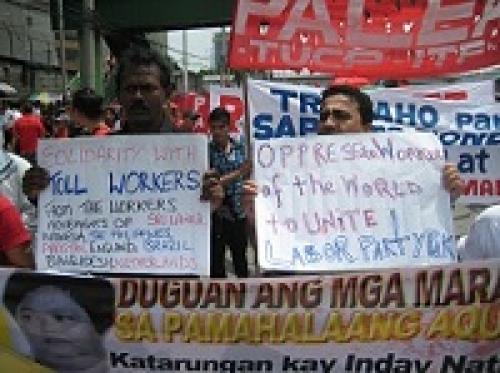 Unlike the famous boxing match between Muhammad Ali and Smokin’ Joe Frazier, the Asian Global Justice School (AGJS) at the International Institute for Research and Education (IIRE) in Manila was a showdown between political heavyweights, with much less violence and much more love and cooperation – that is, until the karaoke comes out!

Seriously though, the AGJS is 3 weeks of intensive Marxist and political education for the respective cadre of the different sections of the Fourth International (FI) in Asia (with a few European sections thrown in for good measure), and for the selected guests of the RPM-M (Revolutionary Workers’ Party of Mindanao), such as Partido ng Manggagawa (PM); we thus had members of the Peoples’ Liberation Party (PLP) of Indonesia, with an accompanying member of the KPO, a couple of comrades from the Labour Party of Pakistan (LPP), a Sri Lankan comrade of the of the NSSP, a particularly colourful member of the Bangladeshi section, CPB-ML, along with comrades from the Australian Socialist Alternative – to say that this was a show of internationalist solidarity would be an understatement!

The programme, with its well-thought out structure and content, attempted to cover the most pertinent issues facing comrades within the region today: issues such as the particularities of the global economic system within Asia – with Alex De Jong doing a great job in covering its imperialist content; questions of migration (in the Philippines alone, remittances from OFWs account for approx. 10% of GDP!); class composition and how this feeds into modes of organising, both in terms of traditional trade union structures, and the less orthodox methods of NGOs and more peasant-based strategies – the latter being covered brilliantly by a comrade from the Philippines; the all important question of feminist politics; what it means to be ‘gay’ or ‘straight’ in Asia; how we should organise for the twenty-first century; and, one of my personal favourites, the ecological question and how Marxism points the way to overcoming the contradiction between capital and nature.

Besides the official programme, there was time to develop networks between our respective sections – I was fortunate enough to accompany our Bangladeshi comrade to a meeting with the Asian Peasant Coalition (APC) and I’m looking forward to joining BKF and BKS on the second leg of their famous Climate Change, Gender and Food Sovereignty Caravan that was so successful last year; there was also time to visit and make connections with urban poor resisting eviction form their squats, as well as with members of PALEA (Philippine Airlines Employee Association), who have been fighting against contractualization and unemployment for 10 months – inspirational comrades and a particular highlight of the 3 weeks.

All in all, the AGJS is a stalwart of the FI and its particularly pluralist internationalism. I thank the RPM-M comrades for organising a successful and eye- opening school and I hope to see them again next year!