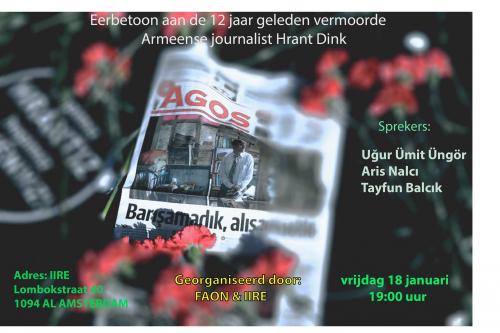 Tribute to the Armenian journalist Hrant Dink, murdered 12 years ago

The world was shocked when on 19 January 2007 the Armenian-Turkish journalist and publisher of the weekly newspaper Agos, Hrant Dink was shot dead by a Turkish nationalist in cold blood in front of his office in Istanbul. Although he had been threatened, he continued as an advocate for mutual respect between the majority population and the minorities in Turkey. He addressed also the Armenian genocide, which brought him to justice. During his funeral in Istanbul tens of thousands of people of different origin gathered in solidarity with signs "We are all Hrant Dink". This solidarity gave rise to hope for unity in the future. Afterwards, this hope turned out to be in vain. Ten years after the murder, this murder case is still not clarified and important evidence has been covered up.

• The programme includes speakers, amongst others, Aris Nalci and Tayfun Balcik. Unfortunately, Uğur Ümit Üngör is not able to participate.
• Maral Jefroudi will conduct a debate between the speakers on the following topics:

- The reason; why has the murder case still not been solved?
- A comparison between 1915 and 2018: What did and did not change in 103 years?
- What are the reasons for the violent aggression and hatred of the Turkish state against Armenians and other minorities?
- What is the reasoning for all the arrests as of late; where academics and activists are arrested on absurd grounds
- Why has Turkey become a prison for journalists?
- Is there a future for the freedom of press in Turkey?

-----
organised by International Institute for Research and Education (IIRE) and Federation of the Armenian Organisations in the Netherlands (FAON).

The event will be in English.