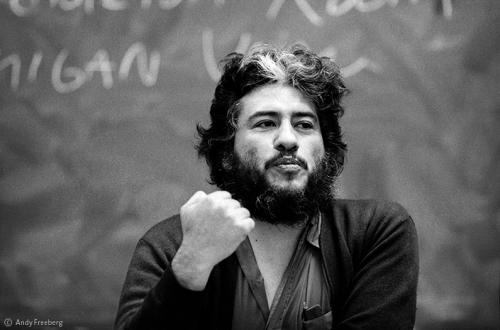 Andrew Ryder discusses We the Indians: The Indigenous Peoples of Peru and the Struggle for Land:

Hugo Blanco is a figure of great significance for contemporary thought on revolutionary potential. His ideas and practical commitment straddles two great perspectives:

First, the Trotskyist tradition that emanates from the experience of the workers’ revolution in Russia, the vital critique of its bureaucratic degeneration and betrayal, and the suggestion of a new form of armed defensive struggle in order to protect the gains of working-class autonomy. Second, the long and unceasing resistance by indigenous peoples against the seizure of their land and living conditions by colonial and entrepreneurial interests. Today, it is a matter of great concern whether Marxism can be stretched to accommodate the needs and desires of indigenous peoples who reject assimilation into the capitalist mode of production. Blanco’s work presents a crucial example of the potential to bridge these two positions and methodologies.

We the Indians: The Indigenous Peoples of Peru and the Struggle for Land, published by the IIRE and Merlin Press, presents a new collection in English of Blanco’s writings across his long history of action and learning. The book includes records of his organizational efforts, his imprisonment and hunger strikes, and his reflections on indigenous community values and ecological experiences. The work also includes his correspondence with the great Peruvian novelist José María Arguedas and his vehement critique of the neoliberal position articulated by Mario Vargas Llosa.

Hugo Blanco was one of the great guerrilla leaders of the 1960s. However, his strategy was notably distinct from the variety practiced across the continent in that era, inspired by the Cuban revolution and Che Guevara’s formulations. Blanco himself points out that he rejected the method of small, mobile groups of dedicated soldiers who aim to quickly confront and overthrow the state. Instead, Blanco called for a defensive armed struggle in order to maintain the autonomy of indigenous areas of the Andes, so that a prolonged democratic social revolution could take place in these territories. In this regard, Blanco partly inherits certain ideas formulated by Leon Trotsky, who suggested popular militias as the properly socialist form of military organization. In the 1960s, while a member of the Fourth International, Blanco believed that this was one moment in a larger revolutionary strategy that could eventually overcome the state and present a prelude to a new socialist mode of production. Blanco’s approach also anticipates the method later practiced by the Zapatista Army of National Liberation.

The Zapatistas also came to reject the foco strategy in favor of a militia under the democratic control of an indigenous social process. Like Subcomandante Marcos, Blanco eventually decided that the goal of seizing state power was not in the political horizon of the present conjuncture, and that it would be more realistic and effective to accept a defensive posture that would be more or less permanent. This represents a significant retreat from Trotsky’s earlier approach, which insisted on an inevitable confrontation with state power and the need to align with working-class sectors in other territories.

This presents a significant question for the articulation between Marxist and indigenous struggles. Marxist thought advocates the working class as the subject of revolutionary change. In some dogmatic formulations, this can lead to the marginalization of rural sectors and social collectives, which can be viewed as remnants of the past. However, as is well known, Marx himself defended the possibility that pre-capitalist communities could present a prefiguration of the new socialist order, and that these did not need to be dissolved into the dominant urban relations of production. José Carlos Mariátegui famously developed an analysis of the indigenous ayllu, the traditional community space, as an area of resistance to capitalist accumulation and discipline and the potential grounds for socialist revolutionary action. Blanco practically enacted the potential delineated by Mariátegui.

However, this leaves open the question of how indigenous struggles might affect the prospects of the urban mestizo working class. Blanco himself says that the antagonism between country and city is obsolete, because neoliberalism has impoverished the masses as a whole. This suggests that solidarity among different sectors of the working class remains an essential goal; indigenous campesino communities are not radically outside the processes of capital but rather constitute an unusual layer of the working class, one that is particularly heterogeneous to the values of a capitalist society. This retains, then, the broader awareness of a national and international revolutionary consciousness, rather than an acceptance of localism.

This is related, then, to the question of a definition of indigenous identity. Blanco is committed to the defense of Quechua and Aymara peoples. Like Mariátegui, he believes that they have inherited a communist worldview that is incompatible with the exploitative individualism and division of labor that characterizes the capitalist mode of production. There is, then, a partial defense of ethnic particularism; this population is uniquely vulnerable to capitalist depredation but also well-suited to resistance and to struggle. It is significant that Blanco rejects a definition of this population according to genetic inheritance – rather, he views its identity as cultural, and he views this culture as one that is open to the participation of outsiders, who can be transformed and who can adopt indigenous values. He writes that “blonde people with blue eyes” can participate in the Indian community and that blood inheritance is unnecessary. Blanco himself is of mestizo heritage; Eduardo Galeano describes him as “that smart, crazy man who decided to be an Indian, even though he was not, and turned out to be the most Indian of all.” I think that the defense of indigenous particularity, then, here presents the possibility of a broader social transformation; not merely the possibility of “respect for difference,” but a transformation of the social order as a whole, by attention to the experience and knowledge maintained and preserved by these communities.

Blanco maintains, at times, a democratic humanism. For example, he maintains that the “struggle of humanity can be summarized as the struggle for true democracy.” The ayllu, for him, presents the nucleus of a direct democracy, one that overcomes the representative alienation inherent in capitalist states. However, Blanco’s humanism should also be understood in terms of his profound respect for non-human social agents. He writes,

He even speaks of the “mortal shame of belonging to the human race.” For Blanco, a socialist viewpoint is more than human; he departs from the modern European notion of human emancipation as synonymous with the domination of nature. In this regard he is quite at odds with Trotsky’s famous comments in 1924 about man improving nature according to his taste. Blanco speaks of “the strong yearning to be a jackal, viper, toad, any animal that kills only to feed, any animal that never tortures.” Blanco’s ideas on revolution can be understood as presenting the challenge to reinvent a conception of what humanity, democracy, and revolution can be according to certain epistemological insights fundamental to indigenous culture.

A Peruvian anthropologist, Marisol de la Cadena, has helped to elucidate this worldview, drawing on a decade of conversations with Mariano Turpo – a Quechua thinker who met Blanco and was inspired by his political commitment. De la Cadena develops the indigenous concept of “earth-beings,” ecological and material agents who have their own capacities, vulnerabilities, and desires. She also understands the ayllu as not only a space of democracy and collective ownership for humans, but also a place in which humans are deeply aware of their interactions with non-human elements. I think that reading Blanco together with Mariano Turpo helps us to understand how the indigenous life-world presents new political possibilities that can be dialectically integrated into the Marxist tradition.

In recent years, we have seen a series of complex efforts to integrate the revolutionary Marxist tradition with indigenous thought and practice. Among others, Roxanne Dunbar-Ortiz, Raúl Zibechi, Álvaro García Linera, Jeffery R. Webber, and Glen Sean Coulthard have made contributions to this process of incorporation. Hugo Blanco is an especially valuable figure because of his deep physical commitment and self-sacrifice, as well as the longevity of his efforts. He presents a link to Trotsky’s insights in the Russian context, to the guerrilla experience of Latin America, and toward the new spirit of indigenous struggle that has taken on new vitality in this century. His writing is fragmentary and unsystematic – because it emanates from practical struggle; but it is worth the effort to determine how our political and cultural understanding can be enriched by his discoveries.