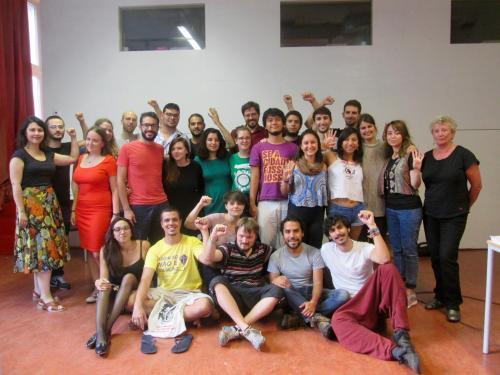 For over 20 years, the IIRE has organized educational courses for young socialist activists. Since moving to the Lombokstraat, the IIRE has organized a youth-school every year, each with around 20-25 participants. The course provides an intensive introduction to Marxist theory and examinations of current struggles, especially focusing on issues that are relevant for youth movements. Responses from participants in our schools have been very positive. The participants describe the schools as valuable opportunities to reflect on their own movements, but also to learn about developments outside their own countries. The international character of the schools is especially appreciated.

This year, we decided to slightly change the format of our youth-school by adding two more days to the course. In recent years, the youth school has also attracted an increasing number of participants from outside of Europe. Of the 20 participants in the 2017, 8 came from outside Europe: from Algeria, Mexico, the Philippines and Brazil. In addition, from Europe we had participants from Britain, Norway, Spain, Switzerland and France. Thanks to our volunteer interpreters, the school was again tri-lingual, in French, Spanish and English.

The participation of activists from outside Europe added a new dimension to the school, inspiring people to consider sometimes drastically different political and social contexts. Each day started with lectures on topics ranging from introduction to Marxist theory to anti-racism to imperialism. During lively formal and informal discussions activists from different continents exchanged experiences and learned from each other's experiences.

Unfortunately, increasingly strict visa regulations often create barriers for participants from outside of Europe. This year, we were hoping to have participation from Pakistan as well, but it was not possible to arrange a visa. In addition to the visa regulations, the cost of travel to Europe is often prohibitive for progressive organisations. Thanks to our donors, the IIRE Is able to help pay for the costs of participants from the Global South. We want to thank everybody who helped make the school a success: participants, lecturers, and interpreters.