No.14 The Gulf War and the New World Order 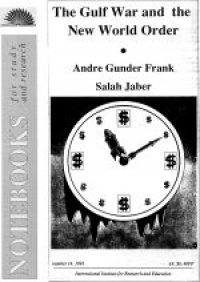 The Gulf War and the New World Order provides thorough analyses of the Gulf War from the invasion of Kuwait (August 1990) to the aftermath of operation 'Desert Storm' ( January/February 1991). It examines the war's meaning for the Third World and gives detailed assessments of Western policies and the changing scene in the Middle East.

André Gunder Frank has taught anthropology, economics, history, political science and sociology at universities in Europe, North America and Latin America. He became known especially through his book Capitalism and Underdevelopment in Latin America (1967), which sold over 120,000 copies in nine languages. His recent work has been in the fields of world system history, contemporary international political economy and social movements. His books include World Accumulation 1492-1789 and Resistance in the World System: Capitalist Accumulation, State Policy, Social Movements (with Marta Fuentes Frank).

Salah Jaber was active on the left in Lebanon until 1983. He has written often on the Middle East for publications such as International Viewpoint (in English), Inprecor (in French) and Al-Mitraqa (in Arabic).