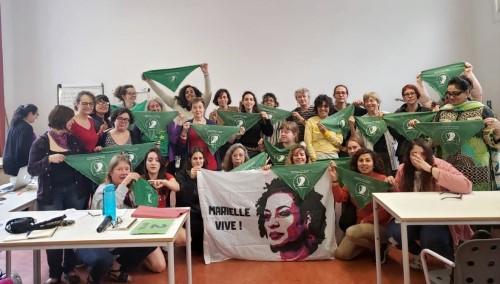 In 2019 the IIRE organized courses, published books and hosted meetings. Here is an overview of what we did in the last year.

We published four books in 2019. Together with Merlin Press from Britain, we published Decolonial Communism, Democracy & the Commons, by Catherine Samary. With contributions by Samuel Farber, Silvia Federici, Franck Gaudichaud, Zagorska Golubović, Ernest Mandel, Goran Marković, Svetozar Stojanović and Raquel Varela, the core of this book consists of essays by Samary examining the ‘short Soviet century’ of 1917-1998, and especially the emancipatory potential in attempts at creating socialism in a ‘peripheral’ state like Yugoslavia.

Next, together with Resistance Books we published Facing the Apocalypse. Arguments for Ecosocialism, by Alan Thornett. This book is a valuable contribution to debates within the emerging climate movement. Thornett explains how climate change and the refusal of governments to adequately address this crisis are the result of the accumulation-driven logic of capitalism.

Critique of Modern Barbarism, essays of fascism, anti-Semitism and the use of history is a new collection of writings by Italian historian Enzo Traverso. Part of this book is an earlier IIRE publication; Traverso’s Marxism after Auschwitz. Understanding the Nazi-genocide (1999). As across the world we are seeing the resurgence of old fascist and anti-Semitic tropes, Traverso traces the genealogy and logic of such ideas, making the book an ‘indispensable intellectual tool for the resistance against barbarism’ (Michal Lőwy). The introduction to the book can be read here. iire.org/node/894.

And towards the end of 2019, also together with Merlin Press, we published the English translation of the political memoirs of Italian socialist Livio Maitan, titled Livio Maitan. Memoirs of a Critical Communist. Towards a History of the Fourth International. From his early commitment to communism under Fascism in 1942, to the end of his life in 2004, Maitan went ‘against the current’ and became a leading activist in the Fourth International. The book is an insiders’ contribution to the international history of revolutionary Marxism. You can watch the video the translator Gregor Benton sent to the launch of Memoirs of a Critical Communist.

As with all our books, we sent these to people who donate 25 euros or more per month.

The launch of Livio Maitan’s memoirs was one of two panels organized by the IIRE at the sixteenth annual conference of the journal Historical Materialism, Research in Critical Marxist Theory in London. Also published on our website is the address given there by Maitan’s comrade Franco Turigliatto. The other speakers were Penelope Duggan, who edited the book, and Josep Marie Antentas.

The other panel was a discussion on building the feminist women’s strike and the new rise of the feminist movement with Nadia De Mond, Julia Camara, Lika Roelants and Stefanie Preziosi. Several other IIRE-cooperators participated in other panels at the conference as well. IIRE co-director Maral Jefroudi presented a paper on the politics of solidarity, IIRE Fellow Sara R. Farris spoke on feminism for the 99 per cent, and our former co-director Peter Drucker participated in a panel on Marxism and Queer Politics and chaired a panel on Marxism and Queer Politics.

Another first for the IIRE was our participation in the yearly Socialism conference in Chicago. With up to 2000 participants, this is the largest Socialist gathering in the USA, and with the rise of new socialist groups such as the Democratic Socialists of America, it is increasingly attracting attention. Together with Solidarity: A Socialist, Feminist, Anti-Racist Organization, the IIRE organized a panel on the rise of the far-right in Europe and the USA. Recordings of the contributions can be found on the website wearemany.org.

The IIRE also organized organized its own regular activities. This year’s youth school had 23 participants for 10 days of lectures. Participants came from Belgium, Brazil, Denmark, France, Italy, Mexico, Philippines, and the Spanish State. They discussed topics such as an introduction to Marxism, women’s and LGBTIQ struggles and liberation, imperialism and geopolitical disorder, ecology, revolution and repression in the Middle East, anti-racism, and Europe in crisis.

This year, our Women’s Seminar, which took place 13-17 July, was particularly successful. Following the new global rise of women’s movements, the biannual IIRE Women’s seminar brought together women from 20 countries to discuss experiences and strategies for future mobilizations. This meeting had the highest number of participants for a seminar so far: 40 women from Argentina, Belgium, Brazil, Britain, Chile, Denmark, Ecuador, France, Germany, Greece, Italy, Mexico, Netherlands, Pakistan, Philippines, Portugal, Spanish State, Switzerland, Tunisia and Turkey participated. The size and the international character of the meeting made it a very inspiring event. To continue the collective work, different working groups were formed. A more detailed report on the seminar can be found here.

At the end of the year, in November and December we had our yearly Ecosocialist School. In addition to participation from countries that are regularly represented at our courses (Denmark, Belgium, Germany, Switzerland, the USA, Philippines, Colombia, Argentina, Philippines, Sri Lanka), we also had for the first time in many years participation from Russia and India with a total of 19 participants. One of our participants, Stephen Mahood from the US group Solidarity wrote; ‘This has been an absolute amazing experience with multilingual daily lectures on historical Marxism, imperialism and geopolitical challenges, global capitalism today, Latin America and the rise of the right, among so many others [...] with a world of experiences on all these topics coming out in great discussion and debates and above all the importance of internationalism and the role of our international. For those that can relate it was like two years of grad school courses packed into 3 weeks and then some!’

In addition to these, the IIRE (co-)organized shorter activities. On October 27, we hosted a public discussion on the occasion of the Dutch translation of the Feminism for the 99 per cent manifesto organized by Grenzeloos. Earlier, on May 9, the IIRE organized a public meeting with Tithi Bhattacharya, one of the authors of the manifesto. An audio-recording of her introduction is available on our website.

The IIRE also co-organized several activities: in January, we organized together with Federatie Armeense Organisaties Nederland (FAON) a tribute to the Armenian journalist Hrant Dink, who was murdered 12 years ago. In May, we co-organized with Histori Bersama a one-day seminar with international speakers on ‘Colonial Legacies today: Indonesia and the Netherlands’. Videos of the seminar can be found on the website of Histori Bersama.

And from the beginning of 2019, the refugee theater collective, Our Footsteps prepared their debut performance through weekly rehearsals at IIRE. The collective performed in many venues including Perdu, Academy for Theater and Dance in Amsterdam, Podium Mozaïek, No Border camp, and in several asylum centers.

In 2020, we will continue to organize our regular activities as well as participate in international gatherings such as the Historical Materialism and Socialism conferences. We also have plans for new publications. One important project will be the English translation of Manuel Kellner’s book on the political thought of our founder Ernest Mandel; Gegen Kapitalismus und Bűrokratie – zur Sozialistischen Strategie bei Ernest Mandel. This book will be published in the well-known Historical Materialism book series published by Brill and in paperback by Haymarket Books. Read more about the project here.

Many volunteers help making our publications and events possible, by interpreting, proofreading or other tasks. We always try to organize our activities as cost-efficient as possible, but obviously international gatherings and publications are costly. We do not receive public money or support from large funding agencies. We are only able to do what we do thanks to our donors.

Please make a donation to support our work, or better yet, become a regular donor:

Donations can also be made to the following bank account:

Other practical information regarding donations can be found here. We are recognized as a non-profit foundation and donations are tax deductible.