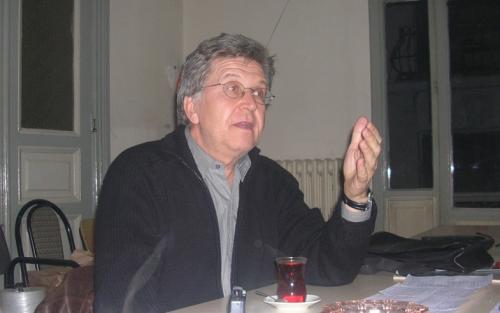 The website Europe Solidaire Sans Frontières has brought together a collection of his writings here.

In the obituary below, two of his comrade remember his contribution.

Our friend and comrade François Vercammen

Our friend and comrade François Vercammen died on Tuesday, June 16, 2015. François had been ill for years and had been cared for in an institution for the last few months. He passed away peacefully, in the presence of his companion, Leen, surrounded by the affection of his loved ones.

François’s conscious political life was entirely devoted to the struggle for the emancipation of the exploited and oppressed. Born into a family of Antwerp dockworkers, François was won at a very young age to revolutionary Marxism and to the Fourth International. Through his profound knowledge of the working class, his great historic culture and his strategic vision, he rapidly established himself as a leader of the first level, first in Belgium and then in Europe.

Within the Belgian section, François was noted particularly for his fine analysis of the strength and the weaknesses of the labour movement, particularly from what he called the “oppositional reformism” of the FGTB. Many trade unionists have benefited from his insights, simple without superficiality and pedagogic without paternalism.

Within the Fourth International, François participated, with Pierre Rousset, in the foundation of the International Institute for Research and Education in Amsterdam, within which he perfected his knowledge of the Russian revolution and of the thought of Lenin, of whom he was a great admirer.

During his last active years, François threw all his strength and intelligence into the analysis of the “European despotic proto-state” and the construction of the European Anti-Capitalist Left (EACL).

Constantly travelling from one end of the continent to the other, he was involved in actively building links between the Italian PRC, the Scottish SSP, the Red-Green Alliance of Denmark, the Portuguese Left Bloc, and the French LCR, in particular.

In 2005, François took an important role in the organization of a symposium in tribute to his spiritual father, Ernest Mandel, ten years after the death of the latter. Those who knew him retain the memory of a man who was friendly, helpful, fully dedicated to the cause of the emancipation, contemptuous of honours and those who sought them.

François was a formidable and intransigent polemicist, but someone who, in debates, never left the terrain of the ideas and principles to which he devoted his life. A special tribute will be made on July 3, 2015 in Brussels, in the afternoon (the time is not yet fixed), in the salle La Tentation, rue de Laeken 28. We will return soon on the life of François, on this site.

In the name of the LCR, we express our very sincere condolences to Leen and to François’s family. The struggle continues, and “Swa” remains in our hearts.