The experience of the so-called socialist countries by Catherine Samary, 1988 - 64 pages
Download this PDF for free
Price
€5.00
(Excl. shipment ) 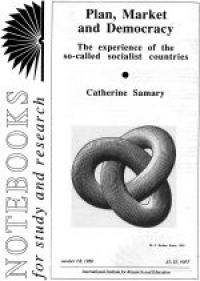 The collapse of the USSR highlighted the dead-end of the sort of planning practised under Stalin, Khrushchev and Brezhnev. But is the only alternative to bureaucratically planned 'command economies' the 'free market'. Rejecting this false choice, Catherine Samary explains that the debate is meaningless unless it is linked to the goal of emancipation. 'We must reject not only dogma', she writes, 'but also the intellectual terrorism that would have its totally acritical view of the market pass for creative innovation; we must lift the veil on both the market (whether dubbed "socialist" or not) and the bureaucratic plan, and expose every exploitative and oppressive social relation associated with them.' Plan, Market and Democracy explains convincingly why every attempt to reform East Bloc economies by adding doses of the market or self-management ultimately failed, and why Samary believes that thorough-going economic democracy remains a real alternative.

Catherine Samary is an economist, specialist on Balkans and Eastern Europe. She has been active in several internationalist associations since the sixties. Founding member of Espaces Marx and member of the scientific council of the French association ATTAC. She teaches at the Université Paris-Dauphine, where she is also involved as researcher in the IRISSO (Inter-disciplinary Institute of Research in Social Sciences) ; she is also associated to the Institut d'Etudes Européennes at Université Paris 8 where she makes lectures on Eastward enlargement of the European Union. An IIRE Fellow, Samary is also the author of no.19/20 The Fragmentation of Yugoslavia. Besides her studies on Yugoslavia, she does ongoing research on the (ex-) Soviet Union, Eastern Europe, and theoretical and historical questions concerning transitional economies and societies.