Who’s Buried in the Graveyard of Empires? 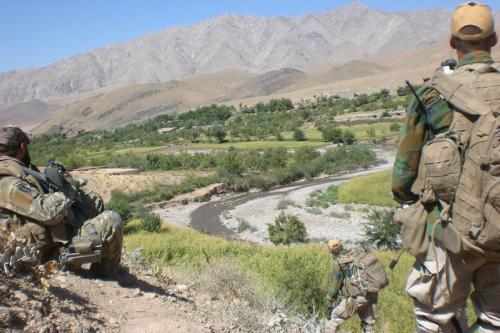 U.S. President Joe Biden invoked Afghanistan’s historical nickname as “graveyard of empires” in order to justify his decision to speed up the withdrawal of American troops from this poor country. He was thus asserting that attempts at securing control over Afghanistan are doomed to fail, while laying the blame on the Afghan government that had been established by the U.S. occupation itself. The tragic pictures of the Afghan government’s collapse along with its state and the panic that got hold of a big fraction of Afghan society, especially in urban areas and above all in the capital Kabul, led to reactions split between two opposite poles: while one pole blamed Biden for having misjudged the situation and having failed to do what should have been done to make sure that the Afghan pro-Western government carries on, the other pole rejoiced and celebrated the magnitude of the defeat suffered by U.S. designs, comparing what took place in Kabul these last days to what happened in Saigon, South Vietnam’s capital, when it was taken over by Communist forces in 1975, two years after the U.S. troops’ withdrawal. It is difficult to decide which of these two reactions is more short-sighted; they both ignore basic facts.

Let us first consider the reproaches made to Biden for his misjudgment (in other words, his intelligence services’ misjudgment) of the Afghan government’s capacity to withstand the Taliban’s offensive. It is truly extraordinary that anyone could believe that the failure of twenty years of occupation in building the foundations of a state with enough credibility and popular support to stand up without being protected by foreign troops, that that failure could have been made up for by prolonging the presence of NATO troops by a few months! The claim is all the more extraordinary in that none of the critics is capable of explaining what the U.S. occupation could have done during a few more months that it hadn’t done for two decades.

In reality, the Afghan government’s fate is but the most recent in a long list of cases of puppet entities created by a foreign occupation that collapse when that occupation ends. Ashraf Ghani was preceded on this same path by Mohammad Najibullah, who had been appointed as president of Afghanistan by the USSR’s rulers in replacement of Babrak Karmal whom they had installed in power when their troops invaded the country, in the same way as Ghani was appointed by Washington in replacement of Hamid Karzai, whom U.S. forces installed in power when they invaded the country. This refers us to the obvious fact that the U.S. occupation of Afghanistan in the wake of the September 11, 2001 attacks was not a “liberation” of that country, no more than the American occupation of Iraq was less than two years later. It was a seizure of the country for reasons pertaining to U.S. imperial strategy in Central Asia and toward Russia and China, coated in the pretext of liberating the Afghans, the women in particular, from the Taliban’s obscurantist yoke, that same yoke that Washington and its regional allies had played a key role in helping to get hold of the country.

Those who hail the Taliban from a standpoint claiming to be on the left or “anti-imperialist” should be reminded that only four governments recognized diplomatically the Taliban’s regime after it took control of Afghanistan in 1996, and those were not Cuba or Vietnam or China or even Iran, but Pakistan, Turkmenistan, the Saudi kingdom and the United Arab Emirates! Add to this that it is well known that behind the Taliban stood, and continue to stand, Pakistan’s military intelligence, which adds to the anxiety of neighboring countries, starting with Iran.

The truth is that Washington didn’t entertain much illusions about Afghanistan’s fate, but knew from the USSR’s defeat in that country and from its own Vietnamese experience that controlling Afghanistan is impossible for several reasons, including the country’s geography and the strength of age-old tribal and ethnic bonds that still prevail there. That’s why Washington’s strategy in Afghanistan was from the beginning qualitatively different from its strategy in Iraq: whereas it aimed at exerting full control over Iraq and deployed there forces adequate for that purpose (in Defense Secretary Donald Rumsfeld’s belief, despite warnings from the U.S. high brass that his estimate of the adequate number of troops was highly optimistic), Washington only deployed a limited number of troops in Afghanistan, while relying upon the Afghan anti-Taliban Northern Alliance to take control of the country and putting pressure on its NATO allies to send in troops so that the U.S. doesn’t need to deploy more.

The strategic goals of the U.S. occupation of Afghanistan, or more accurately of parts of Afghan territory, consisted first of all in building American air bases in this country of highly prised strategic location and in the extension of U.S. influence to Central Asian republics that were previously part of the USSR. With time, Washington came to the conclusion that the cost of its continued presence in Afghanistan was no longer commensurate with these strategic benefits that had lessened over time, especially that the Taliban’s offensive and their ability to control increasingly vast areas of the country indicated that Afghanistan was on its way to confront Washington with a Vietnam-like dilemma between endless escalation and withdrawal.

This said, the closest situation to what is occurring in Afghanistan isn’t Vietnam in fact: the South Vietnamese forces were much stronger than the Afghan government’s forces, and they managed to stand up for two years against Communist forces that the U.S. itself had been incapable to defeat and which enjoyed much larger international and regional support than the Taliban ever had. The closest situation to what has occurred in Afghanistan is what happened to the troops of the Iraqi army that Washington had built up and that collapsed disgracefully in front of the offensive launched by the so-called Islamic State (IS) in the summer of 2014 in the same way that the forces of the Kabul government collapsed in front of the Taliban’s offensive. Needless to say, the resemblance between IS and the Taliban is only matched by the huge difference between the two jihadist groups, on the one hand, and the Vietnamese Communist forces on the other.

This article is translated from the original Arabic published in the issue of Al-Quds al-Arabi dated August 18, 2021.