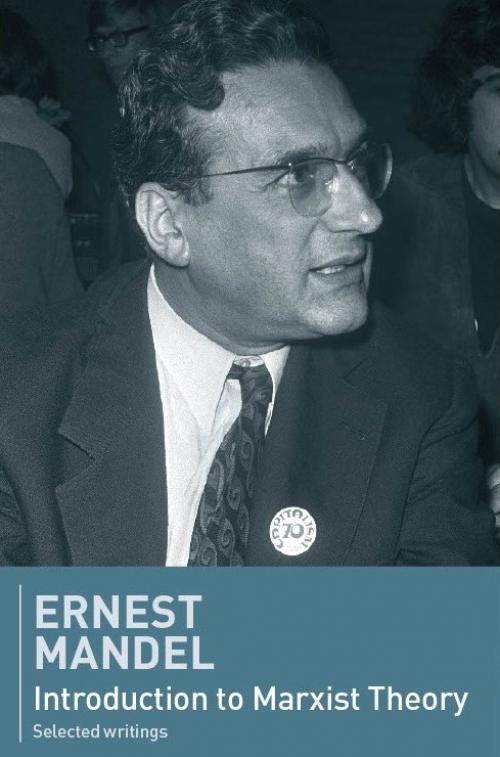 It is hoped that more volumes will follow in the near future. The appearance of this series is gratifying news, and it is high time that a part of the very many writings of Mandel (books, articles, lectures, etc.), appears again in print. Not only as a tribute to his contributions to Marxism, but above all because—read critically—much can still be learned from them.

The modest title of the first volume of the Selected Writings is Introduction to Marxist Theory. But it is a very solid introduction to a wide range of topics. The book begins with a piece on the Marxist theory of the state. This is followed by a section on imperialism and different theories of imperialism, on the Marxist economy, on the character of social-democratic reformism, on bureaucracy, and on Leninist organization theory. All in all, a lot of work for a beginning socialist, who wants to know more about Marx and Lenin's thinking and about the history of the labour movement. But Marxism is indeed for people who want to think critically and keep on thinking in order to act as effectively as possible for a socialist world.

Mandel has become known not only as a Marxist economist and a revolutionary militant and theorist through his books and articles, but also through his performances, lectures, readings, debates. In the Netherlands he became known for his debate with Joop den Uyl, who would later become Prime Minister.

I first met Mandel in Utrecht in 1969 or 1970, when he gave a lecture on Marxism to a room full of students from the chemistry department. It was probably the first time that the abolition of private ownership of the means of production had been advocated in this room at the university, to the enthusiasm of the students present.

One of the next times I heard Mandel speak was at the VESVU congress in May 1973. That was a congress at the Free University in Amsterdam. The texts of the introductions and discussions were published under the title 'Crisis in Economic Theory'. One of the speakers at this conference was the famous Keynesian economist Joan Robinson. Mandel gave an introduction about 'the dialectics of growth'. And under the title 'the prevailing economic theory: science or ideology?' he debated with the bourgeois economist Professor Schouten. To the great joy of the audience, Mandel won that debate with flying colours.

Who wants to know more about the life and work of Ernest Mandel, should definitely read the biography that Jan Willem Stutje wrote about him some years ago.

The book can be ordered here. Below we republish Ian Parker’s introduction to the volume:

So, it wasn’t the death of capitalism that brought us together again but the death of Ernest Mandel. Fragments of the old International Marxist Group, British Section of the Fourth International of which Mandel was the most well known activist intellectual and leader, gathered at Congress House in London in October 1995 for a fairly small meeting to commemorate Mandel’s life. Mandel, who had died in July that year, embodied the modern project to understand and change the world. All those involved with radical research and political practice have much to learn from this, particularly at a time when so many of us are drowning in ideological claims that everything is fake, that there is nothing to be understood, nothing to be changed, and especially nothing to be found in the depth of an individual’s struggle and commitment to society. There is a sense of something changing in society now, and even if this is not the end of history it appears to many to be the end of a particular era of optimism and struggle. No doubt members of the Workers Revolutionary Party felt much the same when Gerry Healy died, and for members of the Socialist Workers Party it was a sad day when they lost Tony Cliff.

One of the speakers at the Mandel commemorative meeting in London referred, I think with no pun intended, to those who had joined the Fourth International in the 1960s and 1970s as ‘the Ernest generation’, and wondered aloud about the prospects of attracting youth to the organization at a time when prospects for change seem so grim. Examples of successful challenge and revolution which were so abundant at that time are so rare now, and it is as if all the television and radio reviews of the history of the twentieth century function not so much to remind us of where we come from as separate us from times that seem so completely different. The story was told of thousands of German youth transfixed by Mandel speaking in Berlin in 1968 and their comment that ‘he is our past, our good past’. What is the connection? Who was he? Why should we know? Why mustn’t we forget it now?

Ernest Mandel was born in 1923 into a working-class Jewish family that settled in Antwerp. When the Nazis invaded Belgium, Mandel was involved with Belgian and German-exile revolutionary communists, Trotskyists who were members of Sections of the Fourth International. The disastrous policies of the Communist Party in Germany followed the twists and turns of Stalin’s diplomatic ambitions with different Western powers, and included at different moments ultra-Left condemnation of erstwhile social-democratic allies as ‘social fascists’ and Rightist reassurance of supporters that it was simply going to be a case of ‘after Hitler, us’. The abject failure of these policies together with the increasing terror in the Soviet Union led Trotsky to argue that a new revolutionary International was needed. Now Mandel age 16 was part of the ‘Fourth’, and active in distributing leaflets to the German soldiers. He was arrested, and held in a camp. He argued with the guards, discovered they were members of the social-democratic and communist parties, continued the argument, and they facilitated his escape.

This oft-told story is part of a particular strategy of resistance which carries with it particular notions of humanity, rationality and solidarity. The Fourth International itself holds within it, as a condition of its very existence, the idea that it is possible to create a sense of community which breaks national boundaries and racist divisions. Unlike the other French and Belgian prisoners who simply reversed contempt and treated the German warders as less than human, Mandel appealed to common interests and common history. There is more at stake here than being nice to others. The building of alliances in this Marxist tradition does rest on a deep historically-grounded humanism, but it is also wedded to a rationalist ethos, to the notion that it is possible to argue to persuade, and that one can participate in an argument and be persuaded. When Mandel addressed German students he addressed them as an audience that could be persuaded. He was made Professor at the Free University in Berlin, but he was banned from West Germany, and could not take up the chair. There is something very dangerous to those in power about someone who speaks across boundaries, and he was also barred from entering France, Switzerland, Australia and the United States.

Some readers will know of Mandel through his writings on Trotskyism (Trotsky as Alternative, Revolutionary Marxism Today, From Stalinism to Eurocommunism) or on economic theory (Marxist Economic Theory, The Second Slump, Long Waves of Capitalist Development). In some parts of the world, such as Mexico, his main influence was as an activist while in other parts, such as Germany, it was as a theorist. While he was not racing from meeting to meeting around the world, whether internal meetings and ‘cadre schools’ of the Fourth International or public rallies, he was reading about crime and writing about it. His last, uncompleted, project was on crime. He had already written a study of the crime novel, Delightful Murder, and the ways in which capitalism rests on crime, encourages and represses crime, the way it evokes the horror of crime at the very moment that it requires it to make its own processes of exploitation possible. Here was an analysis of the appeal that right-wing demagogues make to our anxiety about crime, the fascination that crime has for people brought up in a capitalist society, and the underlying economic conditions that make this anxiety and fascination inevitable in this particular system.

One of Mandel’s major contributions was in Marxist economic theory, and in the careful analysis of material underlying structural conditions for the things that appear to us, on the surface. In particular, Mandel provided an account of the development of what he called ‘late capitalism’, which is the economic infrastructure for what some saw as the ‘postmodern condition’ in culture. Mandel’s account in Late Capitalism of the ‘third industrial revolution’ in electronic and information technology and the growth of the service sector after the second World War explains how it should have come about that so many people feel that they have lost touch with production, that they feel they produce nothing worthwhile and feel as if their lives can be given only transitory meaning by the activity of consumption. Unlike those who revel in this loss of the grand narratives of science, progress and personal meaning in the West, however, Mandel was able to describe these economic changes in the context of an analysis of exploitation and alienation, and of suffering and resistance on a global scale.

In Eastern Europe in the 1970s Mandel’s writings on self-management as an alternative to bureaucratic control were popular amongst dissidents, and one of his last major studies, Power and Money, was on the way in which the bureaucracy in the post-capitalist transitional regimes emerged and the way it reproduced itself. The bureaucracy is a distinct social layer which substitutes itself for the self-activity of the population. It works on the assumption that since people cannot think for themselves, it must do the thinking for them. For Mandel, the conflict in the former Soviet Union, and in China now, was always a ‘three-cornered fight’ between the people, the bureaucracy and the restoration of capitalism. Mandel was convinced that the uprising against the bureaucracy would replace it with a democratic socialist regime, and this is reflected in his writing on the developing crisis of the bureaucracy in Beyond Perestroika.

The hopes of Trotskyists have always lain with a political revolution in the police states which masquerade as progressive alternatives to capitalism to accompany a socialist revolution against the ‘free market’ systems which actually continually suppress free exchange and free association. Mandel’s main fault, several speakers at the commemorative meeting claimed, was over-optimism. But he left us with writing on the history and economic grounding of capitalism, analyses of bureaucracy and alienation, and an account of the underlying structural preconditions for the world we live in today. His writings are an invaluable resource for Fourth Internationalists in Britain, including those working in Anti-Capitalist Resistance and other organizations, and for many other kindred groups around the world. His work still helps us to understand something of where we are and what we might want to be. The fact that he wrote and struggled for a lifetime and left so much of value, is grounds for some optimism, and an example, perhaps, of what a committed and engaged life might be.